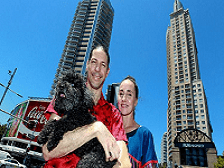 A crackdown on pets in one of Sydney’s biggest apartment buildings could cost owners 20 per cent of the value of their homes at auction, according to industry experts.

The strata committee in the 40-story, 278-unit Elan at Kings Cross has decided to enforce a largely ignored ban on pets at a time when nearly all the new apartments coming on to the market, and most older buildings, are now allowing them.

But the Elan has bucked the trend by cracking down on pet-lovers: no new owners or tenants in the block will be permitted to keep a dog, cat or any other animal – despite the warnings that property values could be hit as a result.

Long-time resident Patty Huntington and her toy poodle Astro Boy are not happy. “I understand that some people might not like pets or might be afraid of dogs, but this is completely out of step with the times,” says Ms Huntington, the Australian correspondent for fashion bible Women’s Wear Daily, who’s lived in the building for 18 years – 14 of those with Astro Boy.

“It’s totally unrealistic given the way people live today. Dogs are now part of the family and for many people who don’t have children, they are their children. And there are lots of benefits for older people in having a companion animal.

“I love this building, it’s a fantastic building, but this isn’t right. I’ve been told if my pet dies, I won’t be allowed to have another. I just hope he’ll last several more years.”

The building, 20 years old this year, is thought to have about 50 pets in residence, but some of the 400-odd human occupants are believed to be hiding their animals for fear of them being banished. Chairwoman of the Owners Corporation Sharyn Minahan says the landmark tower at the top of William Street has never officially allowed pets, but has only recently decided to actively enforce the ban. “We had complaints from people about pets and I heard from a previous committee member that a dog peed on someone in the lift,” she says. “I don’t know when it happened. Also, there have been problems with the garbage chute being blocked as wet kitty litter expands, and one cat fell from high up and got injured; I don’t remember the outcome. I don’t know if there have been any incidents with yappy dogs.

“We have to have compassion, so we had an amnesty for people who had their pets before 2013 and agreed to register them. But the majority of owners here have agreed not to allow more pets.”Local real estate agents have been shocked by the move, saying that pet ownership has hit record highs and competition is intense for apartments in pet-friendly buildings. That’s among both down-sizers who want to keep the family pet with them, and younger people who treat their cats and dogs almost as children.

“We’ve been seeing a lot of buildings in the eastern suburbs that previously had strict rules on the size of pets allowed, or with having to carry pets over common areas, now relaxing those rules,” says Vicki Laing, managing director of Laing Real Estate in Potts Point. “They recognise that older people love having pets, especially if they’ve lost a husband or a wife, and others enjoy the companionship and going for walks with them for exercise. So I just don’t understand a building that would go the other way. “Financially, they will be affected. On average, I’d say prices will be at least 20 per cent less than those that could have been achieved, and any sellers will automatically now lose 20 per cent of the market. I think this is so wrong. Buildings usually have far more problems with people than they ever do with pets.”

Australia has one of the highest rates of pet ownership in the world, with our 25 million pets now outnumbering people. The RSPCA recently reported that about 63 per cent of Australian households own pets, with 39 per cent keeping dogs. A recent American study concluded pet-friendly apartment policies had benefits including more loyal tenants, longer leases, higher rents, significantly smaller vacancy rates and less marketing needed to fill or sell apartments, Nadia Crighton from Pet Insurance Australia says. “Having a blanket ban on all pets in apartments sounds rather outdated,” she says. “Most pets are very well behaved and do not cause headaches. Excluding a massive number of Australians because of their choice to own a pet is simply not fair.

“Research shows owning a pet can provide a wonderful sense of community while pet owners are also very responsible, particularly in Australia. The role our pets play in our family is much larger and deeper than anyone could have imagined 20 years ago, with concrete evidence on their positive impact on our health and emotional health.”

Nearly all new apartments on the market now permit pets, says CBRE Residential Projects director Colin Griffin, with the new strata laws coming in last November introducing model bylaws in which the default position is to allow animals. “I think that reflects the change in people’s lifestyles,” he says. “From a developer point of view, not allowing pets can reduce demand, and even be a deal-breaker. “Pet industry consultant Susie Willis believes most apartment blocks have now developed efficient systems for managing pets, learning from Europe, where pets have lived in units for many years. “But it seems crazy now that a big building like the Elan is doing the opposite of what everyone else is doing and excluding all those pets and their owners from buying in or renting there”, Ms Willis says. “Pets, we know, add a lot of financial value to buildings, as well as creating great communities.”