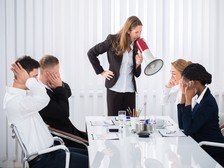 Bullies in strata committees, and how to shut them down

How do you stop a loud-mouthed bully from dominating a strata committee? You know the type; they assume their way is the only way and shout and scream like a spoilt child – or sneer sarcastically like a pantomime villain – when anyone suggests an alternative.

Free and energetic discussion is to be encouraged, but all too often the politics of the playground take over with the strongest opinion prevailing over quiet logic while the majority acquiesce to the bullies rather than become the target of their aggression.

Even strata schemes that have a code of conduct for their committees can find that one or two rogue elements will ignore the rules and disrupt proceedings with the sole intention of promoting their opinions to the exclusion of anyone else.

As recent posts on the Flat Chat Forum testify, pity help those on the committee who dare to express an alternative view. Contempt, derision, ganging up, verbal abuse and a threatening demeanour are all common place in strata schemes where bullies rule the roost.

And don’t even think of quoting chapter and verse of the law to prove your point – anyone who actually knows and understands the law is quickly labelled a ”bush lawyer” by those who operate on the loudness of their voice rather than the value of their opinion.

So what can you do to curb the excesses of the callously self-centred, opinionated, brash and bullying?

Despite the comments above, a code of conduct is a very good place to start, as is a set of standing orders as to how your committee meetings should be conducted.

So what, in summary, should a code of conduct contain? It should warn against aggressive behaviour, raised voices, personal, racial or sexist abuse and maybe even insist that owners remain seated while they are talking.

It could remind owners that they have legal obligations regarding conflicts of interest, while other technical issues sprinkled through the Act – such as the use of proxies – could all be brought together in one simple document.

It’s not going to stop anyone from behaving badly; it’s main purpose would be to show where the line is, just so you can tell committee members when they have crossed it.

As for the standing orders, they are more about procedure such as who gets to speak, when and how often and they give the chair a framework for bringing unruly meetings back to some sort of order.

Which brings us back to what you can do about committee renegades who refuse to play by the rules. You can’t exclude them – they have a legal right to be at the committee meeting, even just as ordinary owners.

And you can’t de-elect them from the committee unless you get a 75 per cent vote of owners at a general meeting or, just as difficult, get orders from the Tribunal (NCAT) to have them removed.

However, if your standing orders allowed the chair to warn a member about their behaviour and then, if they continued to be disruptive, ”name” them, leading to an immediate vote by the committee that they had acted in breach of your code of conduct, that could go on the minutes of the meeting for everyone else to see.

That could appear as “Mr Knowitall from lot 276 was warned and the committee agreed he had breached clause five of the Code of Conduct relating to excessively aggressive and abusive behaviour [or whatever].”

By the way, if anyone is worried about potential defamation in criticising someone in the minutes, the law allows a certain level of qualified privilege for comments that are made as part of the management of corporations and the like, provided they are not done maliciously.

Now, a normal human being would soon realise that continuing this behaviour was counter-productive and pull their head in.

If they didn’t, and they were ”named” a number of times, you would have plenty of ammunition to take to your AGM to make sure they weren’t re-elected.